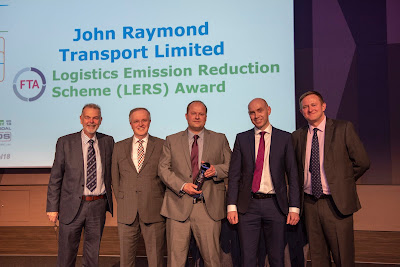 Bridgend, South Wales based John Raymond Transport Limited, part of Wexford’s Nolan Group, was recently honoured with the Freight Transport Association (FTA)’s Logistics Emissions Reduction Scheme (LERS) Leadership in Emissions Reduction award 2018 sponsored by Bridgestone Tyres for its work in lowering the emissions from its 135-unit strong vehicle fleet.
The award, previously known as the LCRS Award, is given to the logistics organisation which, in the opinion of a panel of industry expert judges, has made the most significant step in reducing its impact on the environment during the past twelve months.
“In a field of exceptional entries for this year’s Leadership in Emissions Reduction Award, John Raymond Transport’s system to cut its emissions stood out for its comprehensive approach which covers all areas of the business,” stated Becki Kite, Environmental Policy Manager at FTA.  “By constantly innovating, and exploring new ways of operating, John Raymond Transport has ensured that its emissions levels have been reduced significantly in the past twelve months and has committed to lowering them further moving forwards.”
The John Raymond Transport system employs real-time tracking of freight drivers to enable fleet managers to minimise empty running, and rewards drivers on a point-based system to improve their driving behaviours. Trials of gas-powered LNG and biofuel vehicles have been undertaken in the past year, which have formulated plans for new vehicle acquisition when suitable 6×2 chassis architecture becomes available.
“Minimising the impact of our business on the environment is a key focus for everything we do,” commented Geraint Davies of John Raymond Transport. “We are delighted to be recognised with such a prestigious award for our efforts.  In addition to the driver system, we are committed to using alternative modes including short sea lanes and rail where reasonably practical and will be investigating ways to add alternative, efficient modes of transport into our offer whenever possible in the future.”
The LERS Award 2018 was presented to Geraint Davies from John Raymond Transport by Ian Davies of Bridgestone Tyres at this year’s FTA Multimodal Awards Dinner, held at the NEC in Birmingham.  Other finalists recognised for their emissions reduction work were Greggs, Sainsbury’s and the John Lewis Partnership.

November 28, 2019
We got a great write up from Watts Truck & Van   The company has, in many ways, reflected the wider UK economy with the earlier years being dominated by heavy manufacturing, and in particular, the steelworks of South Wales. The company built on their experience and have gone on to service a wide range of customers that include retailers, food and drink manufacturers, and paper and building material specialists. In September 2016, John Raymond Transport was acquired by Irish based transport company, Nolan Group. Founded more than 50 years ago, Nolan Group has grown to be one of Europe’s leading transport companies by scale and the shared resources and synergies within the group has added strength and resilience to John Raymond Transport. With over 485 transportation units carrying more than 50,000 loads annually it is important for the company to have reliable, cost effective vehicles. And for more than 25 years, John Raymond Transport have been using mainly DAF vehicles t
Read more 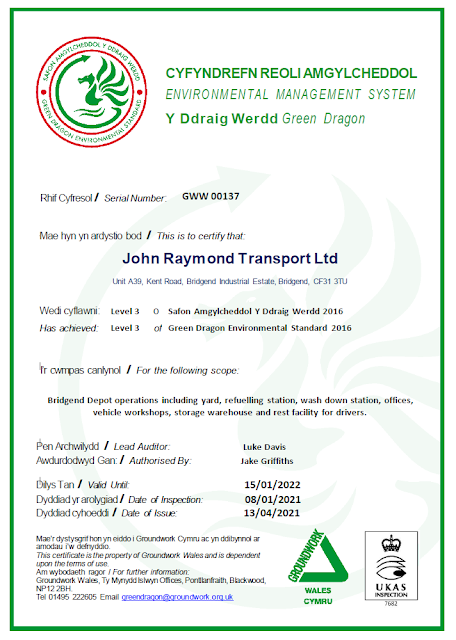